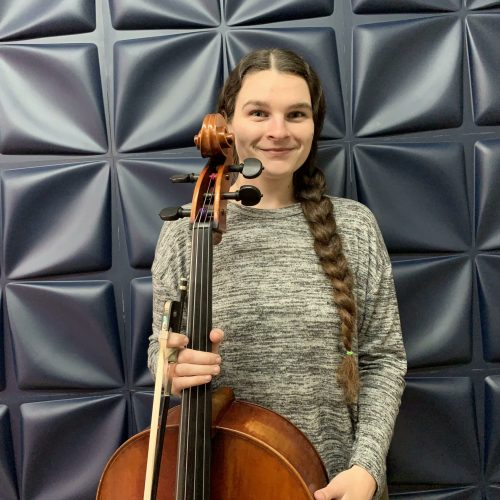 Hi, I’m Faith! I’m a professional cellist with over eight years of teaching experience. I love seeing my students not only become great musicians, but grow and become great people!

Book a trial lesson with me now and save up to 50% on your first lesson!

Originally from Louisville, Kentucky, Faith Rohde currently lives in Colorado where she received her M.M in cello performance with an emphasis on cello pedagogy at Colorado State University. With 15+ years of playing the cello, she is looking forward to what the music industry holds for her and how she can shape the 21st-century orchestra. Faith has studied cello with Robbin Chappars, Paul York, Anthony Kaiti, Jason Calloway, Natasha Farny, Dennis Parker, Regina Mushabac, and is currently being taught by Barbara Thiem.

Faith has enjoyed four summers with the Sewanee Summer Music Festival working with world-renowned conductors in a semi-professional orchestra. Faith has taught for the Kentucky Christian Strings Camp located in Louisville, KY as well as a cello sectional coach for the Community Music School hosted by Baldwin Wallace Conservatory of Music.

She has enjoyed teaching both private and group classes for the past eight years.

Find what makes you Unique

Not sure who to choose? We can help!
Contact us!
Call Toll-Free at: